The long road to hell

It takes, on average (probably), at least thirty minutes for any “action” (of the Hollywood variety) to occur. It’s more if you spend time exploring, collecting and looking at the sights. Knowing already that this was going to be a violent game (it’s got an 18 rating in the UK, which for a game pretty much means violence and more violence) there’s something pleasant about being kept away from the blood and gore for so long.

But the unpleasantness doesn’t even start with cracked skulls.

And if you’ve already read half-a-dozen post-mortems on this game then you probably know what I’m referring to – the game’s handling of racism. With a scene that’s a tad more physical than the two-minute hate of 1984 fame, I cringed inwardly as a mixed-race couple were propelled onto a fairground stage, bound, pleading with the audience below, and Booker learned the purpose of the baseball he’d been handed only moments before. 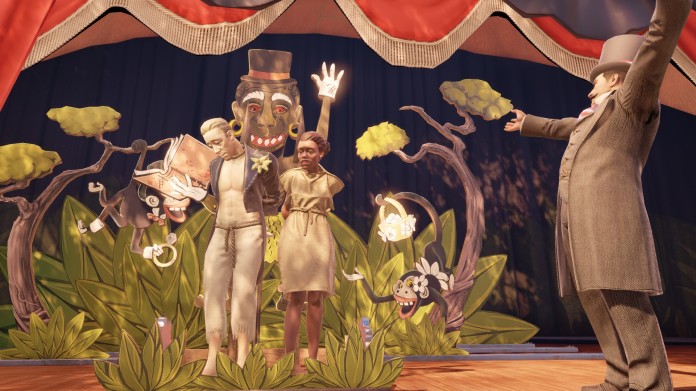 Being who I am as a person, I chose to throw the ball at the master of ceremonies on the stage. The subsequent violence that followed completely detached me from the emotionally painful scene that I’d been eerily captivated by. However, this is not the only moment where Booker’s attitudes to race surfaces.

For instance, there’s a point in Soldier’s Field, near the carousel, where one of the black workers is having a cigarette break. When Booker approaches, the guy starts making excuses about the cigarette break and Booker’s attitude is one of saying that it’s none of his (Booker’s) business. But I don’t know for sure whether Booker would say the same thing had he thrown the ball at the couple earlier on – I really couldn’t bring Booker to throw that ball at them.

Once the fighting began, I felt the same about my surroundings in comparison to the first two BioShock games. Where the closeted space of Rapture was claustrophobic and stifling at times, the open air and skylines were equally as suffocating. It was just a cage with invisible walls.

When you’re given the chance to move around, the pace at which enemies find you makes the space seem like a tactical nightmare. Jumping up to the skyline while good for getting out of the way of larger enemies, later in the game… I never successfully killed anyone by shooting from it, even when I put the breaks on.

And while there is cover in Columbia’s streets and buildings, I felt far more vulnerable in the many battles I toiled through than I did when I played the original games. Was this a good thing? It certainly gave me a bit of a rush, but at the same time it made conflict a stressful experience for me, especially the first time round when I hadn’t gotten the hang of combos for Vigors.

When a lamb isn’t a lamb

My feelings towards Elizabeth’s character remained mixed through both playthroughs. While not having to worry about protecting her was nice in some ways it was an unusual experience as a Resident Evil 4 Professional mode veteran. The game’s reassurance that Elizabeth can look after herself was a bit much, especially when she stood in the way of my gunfire so many, many times.

And then her continual lack of taking up arms was… not believable. It made sense in the earlier stages of her relationship with Booker, but once she’s left you and is found by Columbia’s authorities and later the scissors incident – it didn’t make sense for her to not even try firing a pistol. Her combat role was almost like being a glorified white mage, and yet not at the same time, because even white mages get in on kicking-ass. 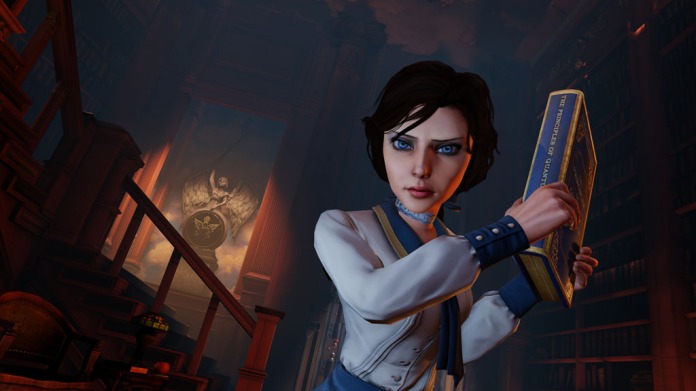 There has been at least one person who’s said to me that she needs to remain pure and so have no weapons, with the hint that her descent into the Elizabeth of later years needs to feel like an absolute contrast. But considering the use she often put tears to, there is no innocence of the lamb about her. Of course this has the advantage of making the posters and symbolism attributed to her ironic, because Comstock knows that Elizabeth is really a wolf in sheep’s clothing.

One thought on “In search of Columbia – dwelling on BioShock Infinite”