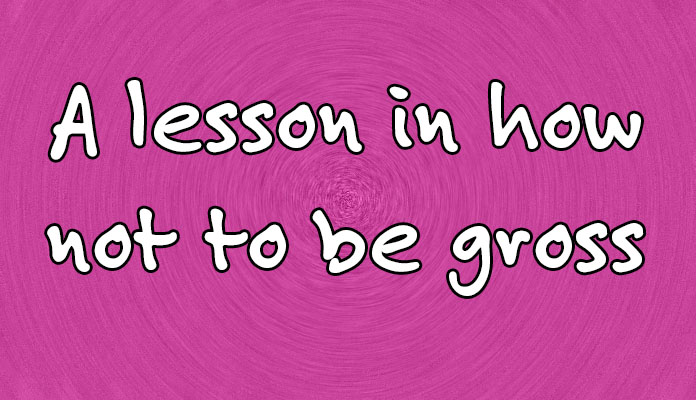 Okay, this piece may end-up sounding sarcastic or a tad disgusting in places, but I need you to learn from this, because I don’t want to feel like throwing-up after checking my inbox – ever again.

Last week The Hex Dimension received a press release for an independent comic. That in of itself was nothing unusual, we’ve had press releases for indie publications before. Sometimes we even reviewed the comics talked about in the communications. The site is absolutely happy to look at indie comics (and videogames and films), but there is a limit to what we’re happy to look at. See, this press release was for a sexploitation comic. Art quality aside, the subject matter for the comic was (if the sender, who is the comic’s creator, had done his research) clearly unsuited for The Hex Dimension. We’ve never covered anything in the genre across any medium and obviously I’m the site’s editor… a woman, and looking at the comic, it was obvious that I wasn’t part of its intended audience.

So what can you, dear indie comic creator, do to ensure that your next press release doesn’t cause someone to want to throw-up, but also gives them a reasonable degree of information to work with?

(And yeah, if it’s an indie videogame you’re producing, or something else, just swap “comic” for your medium of choice.)

3. Make sure your comic is suited to the site you’re sending a press release to

As it was equally obvious that Hex would never discuss a sexploitation comic, I’m sure a site that would comfortably review something like that will probably not want to cover a new breakthrough comic aimed at 9-13 year olds. Spend time on a site, checking out who the editorial team is and looking at their past reviews. You’ll soon know whether you’re sending something out to someone who will be interested or not, after all, not all sites are happy to cover indie content or even cover the genre you’re creating in.

2. Don’t rely on your comic speaking for itself

Give a basic plot (if there is one) and mention the genre so that an editor can figure out which of their writers would be best to cover the comic. There are some sites that don’t give writers who are antagonistic towards certain genres comics of that genre. Also, mention whether the comic has any “trigger events” (depictions of rape, assault, and so on) and what they are (without going into graphic detail), so that an editor can also make sure that they don’t give a comic to a reviewer who would then be distressed by its contents. Do mention if the content is for mature readers only.

Always include contact details for someone who can answer questions about the comic’s content if it’s not the person sending the email who knows its ins-and-outs.

If your comic is of a more risqué nature, then you might embarrass (that’s putting it lightly) an editor when they open an email in public to find sexually explicit images. But images in an email also increases its size and if that email is opened on a mobile device while the addressed is not on Wi-Fi, then you’re increasing their data usage, which they won’t appreciate.

Instead, include a URL to press images stored via something like a cloud file storage such as Box, Dropbox or Google Drive, but do not embed. And if the images are explicit: give a warning before the link to state so, this also applies to images that depict graphic violence or gore as well.

Once you undertaken those three steps you are good to go. Send that press release!

Got any questions about writing the press releases for your comic? Then you can email me at the address here or leave a comment below.

Have a comic you want the Hex Dimension to review? You can get in contact with us here.